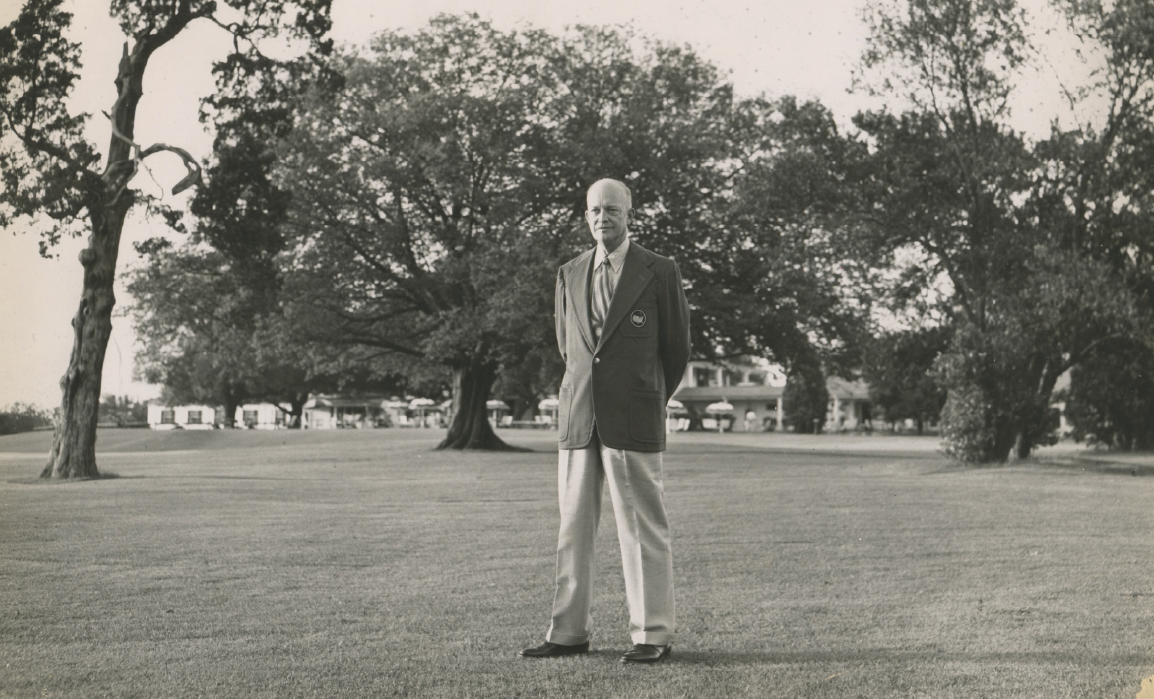 All good Augustans are at least vaguely familiar with President Eisenhower’s visits to Augusta National Golf Club. Everyone fondly recalls his perennial
frustration with the pine tree that bore his name on the 17th fairway, the tree that was tragically laid low by the ice storm of 2014. Everyone knows about the Eisenhower Cabin, and some of the more perceptive (or perhaps more religious) are familiar with his regular attendance at Reid Memorial Presbyterian Church. For most of us, the Eisenhower connection has been reduced to this series of anecdotes, a curious collection of episodes which could potentially wow the uninitiated visitor, but little more.

Eisenhower’s relationship with Augusta National was far more than the sum of these Jeopardy!-worthy tidbits. The course was his refuge, a serene sanctuary of rest and recuperation from the serious matters that weighed upon his mind throughout his public life. It was where he established and nurtured the most important friendships of his postwar career, relationships which sustained him through the trying crises of the Cold War. Furthermore, the relationship between him and Augusta National was a symbiotic one, with Eisenhower generating hitherto unseen interest in golf, indirectly responsible for the mass appeal of the game that we see today.

Born to a Pennsylvania Dutch family on the plains of Texas, Dwight D. “Ike” Eisenhower received an appointment to West Point in 1911 and never looked back, amassing almost 30 years of military service by the time of America’s entry into World War II. As an unrivaled master of coalition warfare, with acute political instincts and excellent administrative skills, he was selected as the first supreme commander of the Allied Expeditionary Force in Europe.

Eisenhower possessed an accelerating obsession with golf which started to truly gain momentum during the war years. Due to an injury suffered during his football days at West Point, Ike had difficulty shifting weight from his right to left sides on his downswing, leading to a marked proclivity for slices. Consequently, his handicap would remain between 14 and 18 his entire life.  Nevertheless, he remained a legendarily fierce competitor on the course. By his time on the Western Front, Eisenhower was already taking fire from some people for his habit. In November 1944, Britain’s Chief of Imperial General Staff Sir Alan Brooke complained, “Eisenhower … is on the golf links at Reims — entirely detached and taking practically no part in running the war.”

Eisenhower first entered Augusta’s gravitational pull in December 1944, during the desperate and bitterly cold Battle of the Bulge. Bill Robinson, vice president of the New York Herald Tribune — and coincidentally a member of the National — scheduled a meeting with him to discuss regulations that were affecting Robinson’s business in Paris. Although the German offensive had ensued merely days earlier, Eisenhower kept his appointment, meeting with Robinson in a bombed-out country club near Reims, France.  The two immediately hit it off and would remain lifelong friends.

Ike and the National would not officially cross paths until years later. Over the six months after meeting Robinson, Eisenhower brought the campaign against a devastated Germany to a victorious conclusion. He was then appointed as the first military governor of the American-occupied zone in Germany and next served as chief of staff of the Army. In spring 1948, Robinson invited him down to Augusta for a visit. Eisenhower was hosted by Robinson and four other men who would become the core of “the Gang,” Eisenhower’s exclusive inner circle: club co-founder Cliff Roberts; Bob Woodruff, chairman of Coca-Cola; Pete Jones, a petroleum magnate; and club co-founder and golf star Bobby Jones. Eisenhower lingered at the club for 10 days, playing numerous rounds of golf and bridge with his new friends. Before his departure, he was inducted as a member.

Eisenhower’s first civilian position, as president of Columbia University, provided ample opportunities to golf with the members of the Gang living in New York City (Roberts, Robinson and Pete Jones, among others).  Soon, however, the needs of America’s national security apparatus intruded into his peaceful life in academia. The postwar attempt to create the Department of Defense was foundering on the rocks of petty jealousies and deep-seated interservice rivalries. Eisenhower was called to Washington by President Truman as the one man who could break the deadlock. The stress of dealing with the situation got to Ike, and in March 1949, he experienced a severe attack of acute gastroenteritis. For recuperation, he could think of nowhere better to go than the rolling hills and shady pines of Augusta National. Over the next month, Ike transformed from a trembling mess into the height of health.

The stars began to align for a presidential bid in 1951, while Eisenhower was in Europe acting as midwife to the tortured birth of the command infrastructure of NATO. At first politically indecipherable as a military man, it had become clear that his sympathies lay with the Republican side of the aisle. Staunchly GOP in alignment, the members of the Gang were tireless agitators in support of a bid. After a large pro-Ike rally at Madison Square Garden in New York, Eisenhower agreed to throw his hat into the ring. With Bobby Jones heroically campaigning for him on the convention floor and Roberts adeptly parrying political criticisms over Ike’s golf game, Eisenhower secured the Republican nomination, later crushing Democratic nominee Adlai Stevenson in the November 1952 general election.

Eisenhower flew to Augusta National the day after his victory, marking the beginning of his time as a president-elect in the best way he knew how. Bobby Jones immediately took precautions to ensure that the National would remain a place of escape for Eisenhower during his presidential years, laying down rules for a tightly restricted media presence. In 1953, the president visited the National the week after the Masters Tournament, a pilgrimage he would make seven out of his eight years in office. That post-Masters visit was not to be trifled with: In 1956, the Washington Senators’ American League opener was rescheduled around the trip to Augusta so Ike could throw the ceremonial first pitch.  Realizing that Eisenhower’s presidential status would require enhanced accommodations, Bobby Jones solicited donations from members to build a structure capable of housing his entourage. Eisenhower Cabin was unveiled for the president’s Thanksgiving weekend visit in 1953.

Eisenhower’s arrival in the Oval Office initiated a golf craze. In the first half of the century, golf had not quite been able to shake its reputation as the sissified preserve of the blue-blooded aristocracy. Eisenhower’s highly publicized obsession with the game obliterated what remained of this sentiment. As president, he played over 800 rounds of golf, including 210 at the National, and he even had a putting green installed on White House grounds. Millions of Americans tried their hand at golf for the first time, more than doubling the number of American golfers by the end of his presidency.  Fred Cochran, promotional director of the PGA at the time, asserted that “Ike’s infectious enthusiasm was the greatest thing that ever happened to the game.”

The Gang’s influence also permeated Eisenhower’s presidency. He served two full terms, largely keeping the U.S. prosperous and safe. As he deftly steered the country through the troubled waters of the 1950s, navigating crises such as Suez, the Taiwan Straits, Hungary and Little Rock, the Gang frequently traveled to play golf with him at courses from Denver to Newport, R.I., to Washington, D.C. Their influence extended far beyond his leisure time, with members serving as some of the president’s most trusted informal advisors and confidants. When Eisenhower suffered a heart attack in 1955, Roberts was the first non-family visitor allowed to see him.

Eisenhower continued to visit Augusta National in his quiet twilight years. He was there on an extended stay after celebrating his 75th birthday in 1965 when he suffered a second heart attack. Despite declining health, he continued to play golf, and he scored his one and only hole in one in Palm Springs, Calif., in 1968. He was hospitalized not long thereafter due to a third heart attack. He never again left Walter Reed Army Medical Center, dying on March 28, 1969. His love for the Gang ran true to the end; 11 days before his death, Ike sent a telegram to Bobby Jones marking his birthday.

Today, the primary relics of Eisenhower’s presence at Augusta National are the place names and tall tales that have passed into tournament lore, but those alone do not capture the heart of the story. Ike possessed a deep and lasting affection for the course and the relationships he built there. Bobby Jones, Roberts, Woodruff, Pete Jones and the others were true friends who stood by his side and provided him with much-needed respite from the demands of office. It’s an honor to Augusta and a testament to the spiritually restorative powers of Augusta National that one of our greatest presidents came here when he needed to recharge. I’ll let Ike finish in his own words. Speaking of the Gang, he reflected, “It is almost impossible for me to describe how valuable their friendship was to me. Any person enjoys his or her friends; a president needs them, perhaps more intensely at times than anything else.”

Photos courtesy of The Augusta Chronicle

Where to Take a Romantic RV Excursion This Valentine’s Day

An American Coach RV's luxe layout. (Courtesy American Coach) By Jennifer McKee Want to strike out on the road for a fresh air, socially-distanced, Valentine’s Day? Luxury RV enthusiasts can look to American Coach for a memorable affair as they drive through some of...

Celebrate Special Occasions With These Wonderful Wines and Spirits

Downton Abbey fans will love Highclere Castle Gin. (©Highclere Castle Gin) By Jennifer McKee While it's always a fine time for wine and spirits, your special occasion will be that much more so with these flavorful bottles. Read on for a list of our favorites for...