Last year a family member gave me a fitness tracker. It was a not-so-subtle way of reminding me that my former hour-glass figure had recently morphed into the shape of a Duke’s Mayonnaise jar.

My fitness tracker is so ugly it looks like it should be sold in the plumbing department of Home Depot as a drain sealer. Also, it’s an affront to someone who prides herself on her ability to accessorize. I don’t have anything that goes with black rubber, thank you very much. Not to mention one of the most popular brands of fitness trackers rhymes with nit wit.

But then someone tagged me at a Christmas party on Facebook. I didn’t have my glasses on, and all I could see was a huge red blob in the photo. I thought, that’s either a row of Rockettes or a really fat Santa Claus. But then I squinted and realized it was me.

Reluctantly I gave into the fitness tracker which, incidentally, is very much like Santa. It sees you when you’re sleeping, and it knows when you’re awake (and stuffing Cheez Nips into your mouth). It also knows how many steps you take every day and encourages you to compete with others.

I decided to compete with my fichus plant and was beating the stuffing out of its daily step count, which made me feel smug. My fitness tracker thought otherwise and sent me a series of “Are you okay?” emails, reasoning that someone who had such a low daily step count must surely be entombed in a full-body cast or clutching lilies in a pinewood box.

But then one day my car wouldn’t start, and I had to walk to work which is about two miles away. On the way home, I felt an unfamiliar buzzing on my wrist, signaling that I had walked 10,000 steps.

It’s ridiculous how motivating a mild electric shock can be. The theme from Rocky started  playing in my head, and as soon as I got home I told my fichus, saying, “Eat my dust, pot potato.”

Instantly I was a rabid fitness tracker convert, collecting steps the way a scantily clad Kardashian collects Instagram followers. I downloaded all kinds of motivating songs to my computer: “Walk Like a Man,” “Walk Like an Egyptian,” (which has the added benefit of toning the upper arms) and “Walking After Midnight” (which I was regularly doing, simply to reach my daily step goal). What a shame I wasn’t a sleepwalker!

Once, when my fitness tracker refused to sync, I decide to stay in bed all day, because what’s the point of taking steps if they aren’t counted? In the mean time the pounds were melting away. Mostly because eating meant sitting down, and I was doing very little of that. Besides who wouldn’t lose weight if, in one week, you walked the length of the Great Barrier Reef?

I kept up this pace for almost an entire year until my feet finally called, “Uncle.” My worn-out arches took a couple of weeks to recover and in the mean time, I retired my fitness tracker. I was tired of counting steps and decided to count more important things, like blessings or how many shoes I have in my closet. (Not near enough, and I wore out a few pairs doing all those darn steps. Time to go shopping). Happy New Year, Y’all!

This article appears in the January 2017 issue of Augusta Magazine. 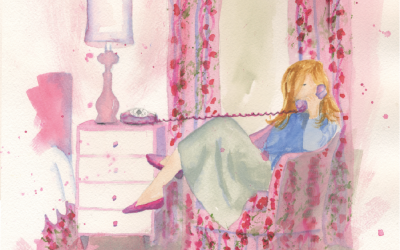