My phone rarely rings. When I was a teenager that would have been a fate worse than running out of Clearasil. A ringing phone was the sound of popularity. There was nothing better than hearing that joyful jangle, followed by your little brother hollering, “It’s for you… Again!”

My dream was to have a line of my own—the much-coveted children’s line—but I’d have settled for my own pink princess phone to handle the heavy traffic. My parents nixed both ideas. I was reduced to using the kitchen phone and pulling the chord into the hallway so my mother couldn’t overhear my conversations while she cooked Hamburger Helper.

Americans now do more texting than talking on the phone, and it occurred to me that younger generations are going to miss out on any number of phoning rituals. Like the joy of making crank calls.

My friends and I used to while away evenings calling strangers and saying, “Do you have Prince Albert in the can? Maybe you should let him out.” Or we’d phone a public place like a roller skating rink and have them page, “Anita Bath” or Ima Moron.”

Years ago, when people wearing puka beads still roamed the earth, you always knew where your phone was. It was anchored to the wall or plugged in, and there was no losing it unless your house was hit by a hurricane or a runaway bulldozer. That’s not the case anymore. The other day I found my phone in freezer next to an empty box of ice cream sandwiches.

Youngsters will also miss out on the ultimate satisfaction of hanging up on someone with a big, fat bang. You can’t do that with a cell phone. In fact, most people won’t even know you hung up on them. They’ll simple assume your call was dropped or your batteries went dead and all your delicious outrage gets wasted.

And what about answering machines? I used to spend hours coming up with a snappy greeting.  n college my machine said, “A is academics, B is for beer. One of those reasons is why I’m not here.

There was also the angst of coming home to an answering machine that callously announced, “No new messages.” It might as well have said, “You’re a friendless loser with the personality of an aphid.”

Now all that answering machine drama has gone the way of the Walkman. Most people don’t even know how to get into their voice mail, and instead of putting energy into composing clever answering machine messages, they fret over our emoji selections: Should I send the kissy-face one or the winky one?

The present-day sound of popularity is the bloop of a text. As for the ringing of the phone, it usually means either a telemarketer or bad news, giving new meaning to the saying, “For whom does the bell tolls, it tolls for thee.”

Article appears in the January 2018 issue of Augusta Magazine. 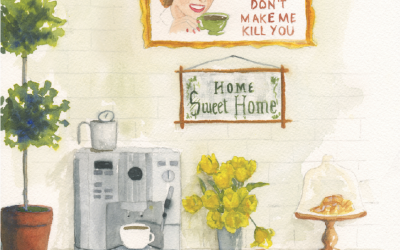 I Only Drink Coffee on the Days That End in Y

If you’re like most people, when someone asks you, “How do you take your coffee?” your answer might be, “Very seriously!” Recently I saw a post on Facebook that said, “Coffee is starter fluid for the morning impaired.” Perhaps you know the type. They’re the subhumans...