The New York Butcher Shoppe, which offers quality meats, gourmet prepared foods and specialty grocery items, was started 30 years ago in Mt. Pleasant, S.C., by a third-generation family of butchers from Brooklyn. Today it’s a popular franchise throughout the South.

The Augusta Surrey Center location, owned and operated by Jack Deese, is the ninth franchise. After spending 16 years in food and beverage, doing everything from washing dishes to running kitchens from Portland to Manhattan, Deese decided he needed to finish his degree and “get a real job.” After a brief career in marketing—all the while preparing, smoking and curing meats in his spare time—Deese and his wife Margaret, an Augusta native, returned to the area. The New York Butcher Shoppe concept was an opportunity to follow his passion and fill a void for a local butcher, while providing superior food and customer service without the pressures of restaurant life.

The meats lining the gleaming butcher case are all butchered, trimmed and cut in-house from primal loins. You’ll find the usual suspects such as marinated chicken breasts (try the Vidalia peppercorn), thick pork chops, ground beef and rosy steaks, as well as less common proteins such as rabbit and duck. Don’t miss the house-made sausages made with heritage breed Cheshire pork, including hot and sweet Italian varieties, bratwurst and sage breakfast sausage. Smoked meats are a particular passion of Deese, who personally smokes all of the meats from ribs to chicken wings to tri-tip (see “Lagniappe” for a summer-ready grilling recipe). He’s also starting a retail dry-aged meat program, which will include salami and prosciutto.

Beyond the butcher case you’ll find house-made prepared entrees including lasagna, tomato pie and Brunswick stew—made with Deese’s smoked brisket, pork butt and chicken—which is sold by the quart but often ordered by the gallon; a full deli counter where you can order custom sandwiches from 11 a.m.–1 p.m. daily or pick up pre made New York deli-style sandwiches; gourmet cheese; and wine (be sure to ask about their wine club).

Layla Khoury-Hanold is a food writer, avid home cook and life-long professional eater. She has contributed to Saveur, Food Network, Mashable, Drinks International, CheeseRank and Clean Eating. Follow her culinary adventures on her blog, glassofrose.blogspot.com and on Instagram @theglassofrose and Twitter @glassofrose.

A little something extra

This is one of New York Butcher Shoppe owner Jack Deese’s go-to grilling recipes starring tri-tip, a triangular-shaped cut of beef that boasts great flavor and value. He explains, “This roast will provide a perfectly cooked cut of meat for all preferences. The ends will be medium to medium-well while the center of the roast will be tender rare to medium-rare.” Deese recommends serving it with potato salad for a knockout summer barbecue hit.

Blend spices well to make Santa Maria rub. Rub meat side (not the fat cap) with the rub. Smoke tri-tip roast (fat cap up) at 250 degrees for 1½ to 3½ hours, until the internal temperature reaches 115 degrees. Remove roast from smoker. Tent roast with tinfoil and let rest for 10 to 15 minutes. Slice against the grain and serve.

Serves 2-10, depending on how it is sliced and served.
* Dried herbs work, but using fresh makes all the difference.

After a 30-year Army career, Brey Sloan and her husband were looking for a retirement project. Sloan has always had a passion for beer and had been a home brewer for more than 20 years, no matter where in the world she found herself.
When she was stationed in Burma, international sanctions only allowed the sale of beer made in country. As a result, Sloan imported ingredients and set up a home brewing bar. Her beer’s reputation grew such that Singaporean and Burmese businessmen approached her to open a microbrewery, which gave the Sloans the idea of brewing on a commercial scale.
On her next assignment in Japan, she apprenticed at Bayern Meister Bier Brewery in Fujinomiya and, upon retiring in late 2014, she enrolled in commercial brewing programs at Chicago’s Siebel Institute and Doemens Academy in Munich, Germany, where she earned an International Diploma in Brewing Technology. She returned to Augusta armed with the know-how needed to open a microbrewery.
The newly minted Riverwatch Brewery, located in a transformed warehouse at the Augusta State Farmers Market, is ramping up production and distribution and their on-site tasting room is open for business. Currently, there are four core beers available: a fairly strong yet balanced India Pale Ale, aptly named Cautionary Tale for its ability to sneak up on you; 104 (named for Riverwatch Parkway) is a Pale Ale reminiscent of a British-style ale with a hint of sweetness but a crisp, dry finish; Scenic Overlook, a light, refreshing Blonde Ale that’s perfect for those just getting into craft beer; and a filtered lime wheat beer called NPR (Nearest Point of Relief, a golfing term with a double entendre), which promises to be a summertime favorite. There are also one or two rotating beers exclusive to the brewery or with limited distribution, like the Irish Red Queen Maeve made for St. Patrick’s Day.

Heather Chancey has always loved ice cream, but it takes a special kind of passion and dedication to attend ice cream school. Chancey, who runs the Village Deli, began experimenting by making ice cream at home and trying out new flavors on customers. Driven by demand and her own curiosity, Chancy headed to Wisconsin to learn the business of making ice cream and in late February she opened Summerville Scoops in Daniel Village next to the Village Deli.

The ice cream base (which is made for her by a Massachusetts-based company) is 14 percent butterfat, which results in a supremely creamy mouthfeel and eats like frozen custard. Flavors are displayed in gelato-style tubs to maintain that coveted creamy consistency and allow customers to see what they’re ordering. You’ll always find classic flavors like vanilla, chocolate and strawberry, along with crowd pleasers like salted caramel and cotton candy. There’s also a rotating roster of fantastical options, including maple syrup-brown sugar with candied bacon, goat cheese with peaches, lemon custard and jalapeno coconut, to name just a few.

Scoops are available in 8- or 12-ounce cups, pints, quarts or in house-made waffle bowls or cones. You can order any of the flavors as a milks hake or create a custom shake by adding Monin sugar cane-based syrups, which are also used to make craft sodas. (Chancey’s favorite shake combination teams huckleberry syrup with vanilla ice cream.)

Flavors in the works include cranberry-green tea, fig and Sriracha, and there is also an expanded offering of custom ice cream cakes, ice cream sandwiches, pre-packaged pints and Italian ice in development. If you’re looking for a unique party venue, Summerville Scoops hosts parties on Sundays, when kids (and the kid in you) can learn to make waffle cones and crank their own cotton candy. 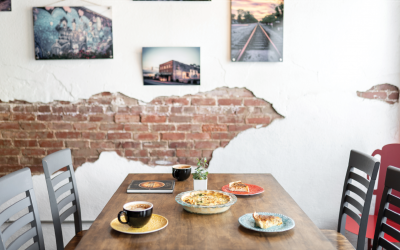