There’s an old joke that Augusta Amusements owner Mike Deas can definitely relate to: What’s the difference between a rock guitarist and a classical guitarist? One plays three chords for 30,000 people, the other plays 30,000 chords for three people.

While he’s never staged an event with a turnout that small, Columbia County’s number one impresario aims for crowds a lot closer to three than 30,000. Bigger is not necessarily better for someone who has perfected the art of the intimate concert experience.

“My goal every year is to break even,” says Deas, who has been bringing quality acts to the Jabez S. Hardin Performing Arts Center inside the main branch of the Columbia County Library for the past several years. Breaking even can be a bit of a challenge in a venue with fewer than 300 seats. But unless you enjoy attending concerts that require a pair of binoculars to get a decent view of the performers, 300 seats is a good thing.

As country legend Colin Raye said from the Evans stage this past November, “If I lived here, I would be at this beautiful theater every time there was a show.”

The intimate setting and quality acoustics of the library’s cozy amphitheater are like having a command performance just for you and a couple hundred of your fellow live music lovers. The worst seat in the house would be prime real estate in the rock world arena.

The trade-off, if you can call it that, is the thrill of discovery. The Jabez Hardin stage might not have a name-brand performer on it, but you have to remember there was a time when The Beatles played to nearly empty coffeehouses and when the biggest crowd Carrie Underwood had ever performed before was a few dozen people.

It isn’t that Mike Deas is just getting his feet wet in the concert business, starting small and working toward the day when he will fill 30,000 seats. It all goes back to that “bigger is not necessarily better” business model. But it hasn’t always been that way.

Once upon a time Deas served on the board of directors for a much larger concert venue: the Imperial Theatre.

“When I lived in Atlanta, I would frequently drive home to visit family on the weekends. One day I drove down Broad Street and saw the Miller was boarded up and for sale,” recalls Deas. “I contacted the broker and asked for a tour. I saw a dilapidated theater and wondered how the powers that be in Augusta could let such a beautiful venue with its rich history get into this condition.”

Deas decided to do something about it. He created Friends of the Miller, a group of theater enthusiasts and friends who share his goal of seeing the Miller restored and operational. That led to a seat on the Imperial board and that experience, in turn, motivated Deas to create Augusta Amusements.

Strike that. To reincarnate Augusta Amusements.

Look very carefully at the Augusta Amusements website and you’ll notice the small letters, “Since 1931.” Deas no doubt looks young for his age, but he can’t be that well-preserved.

In its original 1931 incarnation, Augusta Amusements was the brainchild of Frank Miller—yes, he of Miller Theater fame—and four other more or less silent partners. The partnership owned and operated Augusta’s abundant supply of stages in the days of yore: the Rialto, at what is now Casella Eye Center at Eighth and Broad; the Modjeska across the street on the south side of Broad Street’s 800 block; then five years later the “New” Modjeska opened on the north side of Broad (its 100th anniversary will fall on Nov. 30, 2016); the Dreamland Theater stood at the corner of Ninth and Broad; and the Imperial opened its doors (originally as the Wells Theater) in February of 1918.

All of those theaters were managed by Augusta Amusements, version 1-point-0.

In fact, Augusta Amusements built the second-largest theater in all of Georgia, the Miller, which opened in February of 1940 to great success as a movie house. Alas, like everything else in downtowns all across the fruited plain, the Miller fell victim to the mall boom of the late ’60s and the resulting demise of city centers near and far.

By 1968, the venerable old partnership had dissolved and Augusta Amusements was no more—until Mike Deas came along, fresh from his experience with the Imperial. After lying dormant for more than 40 years, what was once the number one name in Augusta-area entertainment was back.

The experience of management by committee versus being a sole proprietor had a strong appeal. “The first event I promoted as Augusta Amusements was Saturday night, August 8, 2009, when we screened Elvis’s classic movie Jailhouse Rock at the Imperial. While the credits were still rolling, the curtains opened and Jason Sikes and the Sassy Brass Band performed a concert that included many of Elvis’s hit songs.” When the show ended, departing audience members were in for one more blast from the past before they returned to the 20th century: Deas had arranged for classic car enthusiasts to fill the parking spaces up and down Broad Street in front of the Imperial with their gleaming vintage cars.

From that maiden voyage the rest, as they say, is history, but it’s a history that is still being written, if a bit haltingly. “Every year I say, ‘I’ll do this for one more year.’” It’s not a business for the faint of heart. For one thing, it’s expensive: Up-front costs can easily top $10,000, even in a venue as modest as the Jabez Hardin Performing Arts Center. Only 290 seats are available to help cover those costs. Fortunately, Deas has a couple of part-time jobs to keep groceries on the table, and the county provides a lot of support. “I can’t say enough wonderful compliments to the folks in Columbia County from Sandy Boner to Ellen Hill to all the folks who keep the theater in a presentable manner so concertgoers have a wonderful entertainment experience.”

Columbia County residents aren’t the only ones who appreciate what a jewel they have. “We have a sizable number of regular concertgoers who travel hundreds of miles to Evans to see their favorite performers,” says Deas. “People have traveled from North and South Carolina, Florida, Alabama, Tennessee and from as far away as Texas and Minnesota” to attend concerts.

But sometimes even the best-laid plans go awry. Like the time he got a text from pianist Michael Kaeshammer that started out, “We have a problem.”

Kaeshammer was slated to be on stage in Evans at 7:30 that very evening and had missed his connecting flight. It was 2:30 p.m., five hours from show time. And he was texting from Toronto.

Through the miracle of jet propulsion and an 85 m.p.h trip down I-20 from Atlanta to Evans, the show actually started on time, but Deas added a few gray hairs to his collection.

Deas may be the founder of Friends of the Miller and the current steward of the organization that built the Art Moderne masterpiece 75 years ago, but he’s not too sure he’ll see it restored in his lifetime.

In the meantime we have a beautiful and intimate theater right in our backyard and a man dedicated to putting quality acts on its stage.

For that, Deas gets all As. That just leaves it to you and me to fill its seats. 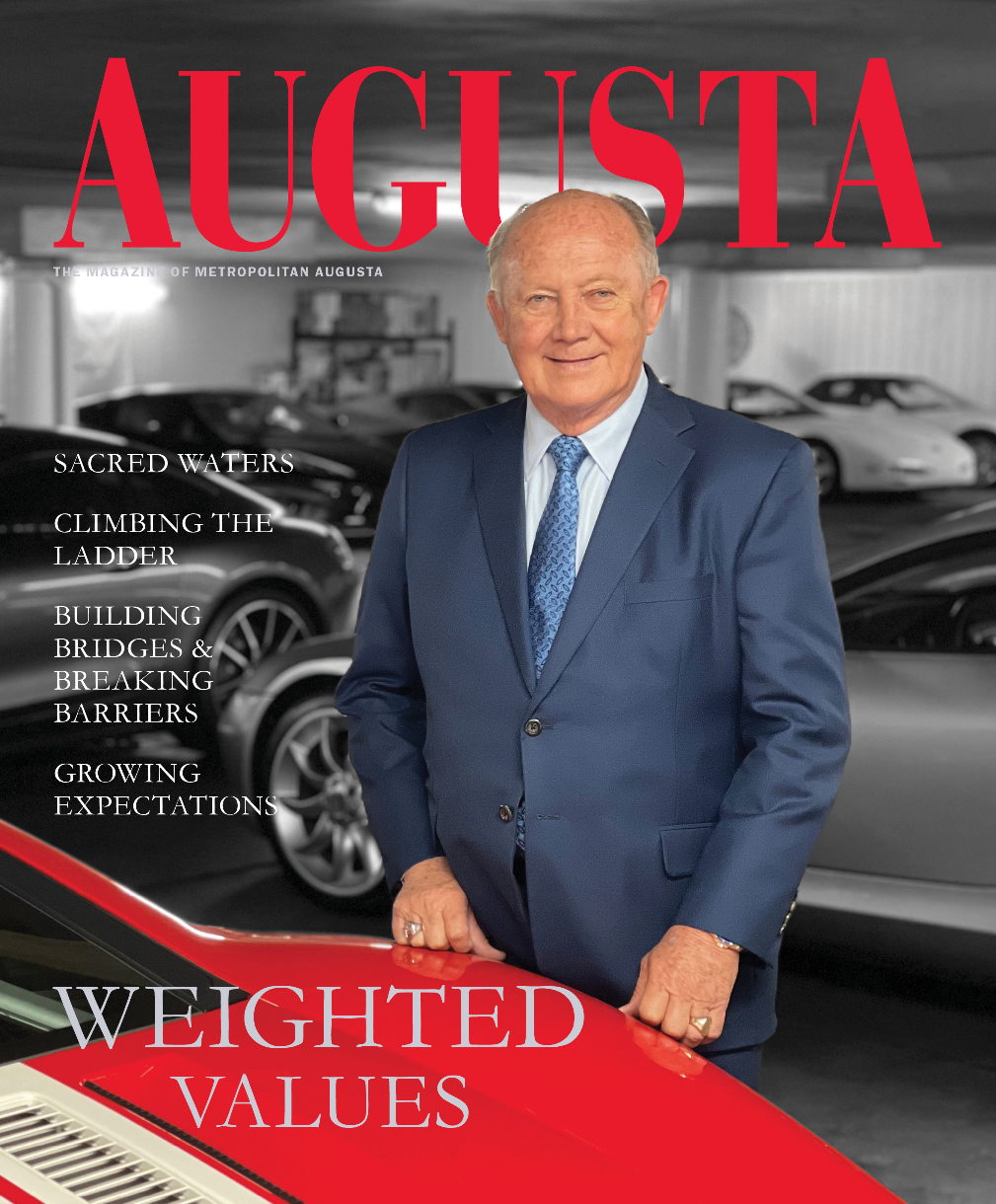 David Byrd is very passionate about his Columbia County home. He should be, considering his family’s history in the area. His father’s side of the family has been traced back to the 1700s, and his mother’s side has a long history, as well. “We have been here pretty...

Why Beds? It all starts with a good night’s sleep. That’s the foundation for a good start and a healthy life. But what if you don’t have a bed? What if you sleep on a pallet on the floor with only a coat for a pillow? “We know our kids go to bed hungry,” says Pat...

Remember when summer vacations seemed to last forever? They still do if you’re the entertainment director for a young whippersnapper or two. On one hand, they would be perfectly content to sleep till the vicinity of noon, eat a bag of Cheetos for breakfast and then...