The thought of making work that’s easily consumed and quickly forgotten — what’s the point? I want my work to be cohesive, to age and improve like old leather.

When I was a boy, my dad thought that a handmade leather sheath for my newly purchased machete would be better than the cheap canvas one that came with it. So we began an Arthurian-like quest for some needed leather, waxed thread and a harness needle. After purchasing our wares, we laid out the plan, cut the unfinished rawhide, moistened it, folded it and tooled it. We used an ice pick for an awl and placed toothpicks in each stitch-hole, removing them one by one as we ran the thread. My dad even used brass rivets to act as bookends to the stitch line. When finished, we held it up and turned it over in our hands, feeling its smooth skin and the long, taut line of stitching, like a dotted line on a discovery map.

That creative adventure with my dad sowed in me an appreciation for any handmade things — fiefs of stone, wooden rood screens, Renaissance rapiers, mountain dulcimers, the 1968 Camaro SS perhaps — but it should be no surprise that the category includes leather goods.

Leather is ageless, at once as mythical as Heracles and as contemporary as Dave Grohl. Heck, leather may have been the very first thing God made after Adam and Eve’s fall: the sacred text says that he made “garments of skins” for them.

It connotes a hero’s stoic strength as much as it does a villain’s sinister sneer, and should you be in the market for a beautiful and practical gift for someone special this season, our city offers up two exceptional local leatherworkers — Kevin Dickson and Robert Twilley.

I met with Kevin Dickson, an active-duty Air Force soldier, in his ranch-style North Augusta home, perched atop a steep yard in a quiet cul-de-sac. Holding a coffee mug, he invited me into the house. We sat in a clean, window-lit front room.

Beneath the window was a low wooden console Dickson built, and on it sat an old-school record player spinning a vinyl of Snarky Puppy. This wasn’t the residence of a “mad” artist whose imagination is always at full-tilt, resulting  often in a disheveled living space; instead, this was the home of a creative who admires clean lines, symmetry and restraint.

Dickson’s leather creations reflect these minimalist qualities, too. He works in a small spare bedroom just down the hall from the front room. Under a single window sits a simple wooden desk with a leatherworker’s tools kept in neat cubbies, jars and pen caddies.

Floor-to-ceiling shelves hold organized bins that contain various accoutrements of the trade as well as several finished products: ladies’ handbags, men’s wallets, satchels and totes of various sizes, rucksacks, belts, wristbands, notebook covers and several other items. What is striking about his work is its simplicity: most of his products are not stamped or carved with patterns, yet you couldn’t call them plain or austere.

A few items bear a high shine, and fewer are dyed; some items have a fabric-lined interior, but other than those exceptions, most of his work defers to the natural beauty of the leather itself. As it ages, achieving its unique patina, it becomes the most outspoken artistic expression.

“It’s a common leatherworking style,” he said. “It’s all pretty clean. I don’t do any tooling, like, for a Western-style or any of that. Honestly, that’s kind of what’s always interested me — that clean, functional, ‘decoration-is-in-the-detail’ kind of approach.”

He admits that such an approach is consistent with the essentialist mien of the military, but then clarifies, “That’s just my personality. The military didn’t make me that way; it’s what drew me to it. The artistic side of [leatherworking] isn’t as big a deal to me; it’s the functionality. I don’t consider myself an artist so much as a craftsman. For me, a new bag is more interesting not because of what the bag is but because of the process of making it, figuring it out.”

Much of Dickson’s work can be seen at his Facebook page called Finestkind Leathergoods (or @finestkindleather on Instagram) along with the brand’s artsy moosehead logo that is stamped onto all of his products. You may wonder if he does custom orders: yes, but he says he’s “fairly picky about commissioned work.” As his creations range from $45 – $800, even conservative customers can go home with a brand new gift with the aura of an heirloom. For inquiries, customers can contact him directly via Facebook or Instagram.

I met with Robert Twilley at the back of the building that houses his workshop just off Gordon Highway. An industrial-sized fan whined loudly at the garage door opening, cooling the long interior driveway.

It is a cavernous space full of fascinating contents: four vehicles — including a nearly mint-condition 1968 VW Beetle — backed into their spaces; behind a curtain of heavy plastic was a wing large enough to accommodate scrap wood — including whole sections of a cedar tree — cabinet saw, miter saws, joiner, drill press and other woodworker tools; there was a fully equipped silkscreen workshop, which bled into an artificially lighted indoor garden. And in yet another separate space was Twilley’s leather workshop.

You might imagine it was cluttered or crowded or dirty, but it wasn’t. In fact, it was slightly reminiscent of Bruce Wayne’s bat cave — an amped-up bachelor pad, though without the gothic overtone. I’m pretty sure Twilley knows this, for he once responded to my compliment that he seemed to be a real Renaissance Man by saying, “I’m just an unsupervised, overgrown kid with expendable income and way too much room to play.”

It is this playfulness, blended with a dyed-in-the-wool utilitarian streak, that makes Twilley an engaging person, who started working with leather about thirty years ago.

“Just for the heck of it. I probably just saw something I liked and thought, ‘I want to make that.’ I’ve always sort of been that way: I see something I like and then dive all into it. Then the novelty wears off, I see something else I like and dive into that. It’s my ADD mind. But leather has been one of those things I always cycle back to, whether that’s belts or wallets or bags — whatever comes to mind.”

Another interest of devotion has been tattooing, which he said was “an opportunity [that] just fell in my lap.”

In fact, he was the former owner of Aces & Eights Tattoo and Piercing for several years before he sold it to two artists there, who subsequently rebranded it to Moth and Magpie Tattoo. And he is still a much sought-after tattooist. This is not an irrelevant historical fact because Twilley distinguishes some of his leather creations by tattooing on them. Why not? Leather is skin.

A man of such diverse talent and capacious creativity would lead most to conclude that Twilley is an artist, right? Surprisingly, though, he took issue with the moniker.

“I’m not really comfortable with the label ‘artist.’ I’m a tinkerer. I’ve never considered myself an artist. I’m a creator. An artist is someone who can just pull [an idea] out of their head. I can’t do that. I’m a puzzle guy, so I can see what I want to do, but it’s like I don’t have my glasses on, so I’ve got to find reference for all my parts.” I suspect, however, that most who see his works, whether of leather or of ink (or both), will aver that he has both skill and talent.

You can view Twilley’s leather creations at his Facebook page or his Instagram (@roberttwilleyleatherworks), or you can go to 584 Broad Street, home to Moth and Magpie Tattoo, to see them in the flesh (literally). That is where he sells most of his goods. Twilley’s work ranges widely in price from $60 – $250. He does not do commission work, but perhaps he might reconsider if you booked him for some ink.

Want to add some flair to that holiday gift? Branch out and get something durable, fashionable and unquestionably cool.

Appears in the November/December 2022 issue of Augusta Magazine. 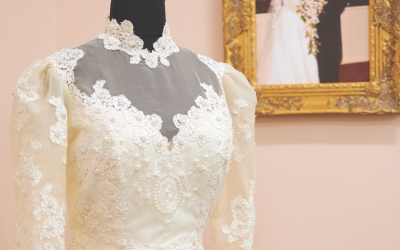 Elegant Bridals, a bridal and special occasions destination, is a passion project for Jane and her husband, Fathy, who opened the shop in 2001. 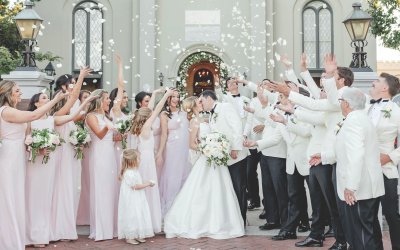 A Wedding at First Presbyterian Church

The wedding of Rebecca McGahee and William Stone at First Presbyterian Church.

The wedding of Rachel and Mark with a unique reception at a Daniel Field Airport hanger.