It has definitely been one for the books. I cannot remember another more tumultuous time in my life, in the lives of my family and friends, or possibly in the world itself. I’ve seen and experienced the entire gamut of emotion and have come face to face with some of the most preposterous to gut-wrenching situations. At the time of this writing, almost 220,000 Americans have died due to a pandemic that a lot of people still believe has something to do with a political agenda. Our nation is the most divided it has ever been, rigidly dug into two sets of ideologies based on either tradition, unshakable belief systems or flat-out misinformation spread at the speed of light thanks to our nationwide addiction to social media. I feel like most people think in their heart of hearts that this mess we’ve all gotten ourselves into is just going to up and fade away after an election, or even more naïvely, after the ball drops in Times Square and a 10-second countdown brings us to the calendar flip into 2021.

The problems are still here. The damage done over the course of the past year is still done. And painting the word “hope” on a fence or pretending like the number sequence tallying up the next year of our Lord seems more and more like silly attempts at making ourselves feel better than an actual chance at doing any significant healing.

So, with that in mind, and knowing the challenges ahead remain vast and wide for all of us, I decided that, along with the cooler weather and the shifting of seasons into a time of introspection and reflection that ushers in the holiday spirit, not to do a summation of the past 12 months of chaos. I don’t feel like it’s necessary to recount the heartbreaking events of 2020 that we all either suffered through together or in isolation. There is enough of that on Facebook, if you’re a glutton for punishment. Instead, here are five things I’m grateful for that the year 2020 brought into my life. Hopefully, after reading through mine, all the glaring blessings that all of you experienced over the past 12 months of physical and emotional trauma will be much easier for y’all to see as well as I have.

1. After the schools for my kids were abruptly shut down and we all transitioned into this new and dysfunctional normal called “at-home learning,” I was able to spend about six to eight hours a day with all four of my children, diving deep into what it was like to not only experience what they did on a regular basis, but to be an active and necessary part of their day. I learned not only how to be their dad beginning at 3:30 every day, but how to be 100% committed to their lives. I learned patience and how to really relate and enjoy their company. That time together is something I’ll never be able to forget, so thank you, 2020. (A side note here would be my newfound respect for the public school teachers, who should all be earning at least $500,000 a year—hands down.)

3. Folklore, Imploding The Mirage and Letter To You. Three albums created by my most influential musical artists, Taylor Swift, The Killers and Bruce Springsteen, all within the confines of their own isolation. Three of the arguably best records of their respective careers, all released this year, proving that even in the middle of a pandemic, when all hope feels lost, art prevails. Music cannot be stopped and can transcend even the most desolate of times. Would these three brilliant monuments to musical history be able to resonate the way they do without the insanity caused by the past year? Maybe. But I doubt it.

4. I had a new novel come out. (Hard Cash Valley — available where all fine books are sold). Did I get to travel the country and promote it properly to the people and fans I only get to see when I go on tour? No. But I did get to reach hundreds of people stuck in their homes just like me via a “virtual tour” who I may never have gotten the chance to meet otherwise. Flying to Houston and talking to a huge crowd of Texans can be great fun but dialing into an event from my living room that allowed me to talk to people in Italy, during a Zoom-event scheduled in North Carolina, is infinitely cooler. Believe me. And without all the hustle and bustle, I was also finally afforded the opportunity to read books by poets like Danusha Lameris, and Pablo Neruda, that had been collecting dust on my bookshelves.

5. I’ll close this out with my favorite 2020 moment. I had the opportunity in October to see my oldest daughter perform in her first high school musical. She was supposed to be in it last year, as a freshman, but like so many other things, it was canceled due to the pandemic. But those kids didn’t quit. They rehearsed in their spare time through the summer, and after two years in the making, they rocked that show better than a lot of things I’ve seen on Broadway. Now, would my daughter, Talia, have been just as stellar and confident a year ago as she was this month? Would Mrs. Cook, the theater director, have been able to bring the absolute best out of these kids with only a year invested instead of two? Again, I don’t know. But watching that happen will be listed as one of the most cherished memories I have of one of my daughter’s finest accomplishments.

See y’all next year. Be safe and love each other. We are far from beaten.

We Need Art More Than Ever

By Brian Panowich I worry about the artist. Maybe because I am one, but mainly because art in all its forms has taken a back seat lately to pain, politics and world-wide strife. The painters who have been reduced to showing their work online as opposed to gallery... 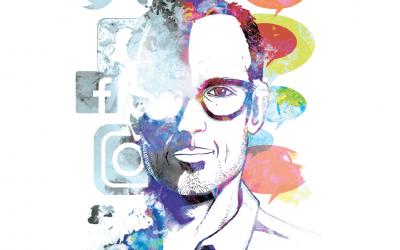 By Brian Panowich  |  Illustration by Michael Rushbrook   So, I did a thing. As of Jan. 1, 2020, I signed off of social media. I closed up shop on Facebook, signed out of Twitter and Instagram, and even let go of my long-standing account on Pinterest. Now, I...