Hurricanes and in-laws are two things that have absolutely nothing in common. At least on the surface they don’t. Some people may argue that those two things aren’t too far removed from each other if you measure them by the amount of havoc they can cause in your life. Hurricanes leave massive quantities of damage in their wake, and from what I’ve been told, or seen in movies and other forms of pop culture, so can your better half’s family.

However, that isn’t the case with mine.

I’ve carved out a pretty comfortable living for myself by writing about family. In my novels—at least the three I’ve written so far—I tell the story of a fictional family of outlaws and lawmen from North Georgia. But I can tell you that writing about several generations of a large family has been quite a task for me considering that I never came from one. My father joined the military when I was a baby and I only have one sibling—who grew up to take the same route my dad did—so for most of our life we were in the wind. I never really knew my extended family and so the concept of big family had always been lost on me. I knew I had cousins and aunts and uncles out there somewhere, but not one I ever had the opportunity to be close to.

Then I met my wife, a Georgia girl with tons of extended family that stretched across the state and beyond. I didn’t just get married to someone. I got married into something. I was fascinated by the idea of belonging. Of course—as my luck would have it—right after my wife and I were married, a major portion of that extended family I was so excited about being around, up and moved to Virginia. It turned out that my new sister-in-law was also military, and when the Navy says move—you move.

I understood that completely.

But it also meant that big family I couldn’t wait to be a part of now lived more than seven hours away. So during the past 10 years of my marriage I haven’t spent more than a day or two around a huge chunk of my wife’s family—and half of that time was at my wedding.

And then Hurricane Florence hit.

That big storm had reared its ugly head and aimed itself directly at that particular part of Virginia. The evacuation call came. The whole clan was on the way.

Visions of Cousin Eddie from Christmas Vacation or the intrusive mother-in-law from Everyone loves Raymond filled my head. A metric ton of people including my mother-in-law, my sister-in-law, her two young children, my teenage nephew, and two big bulldogs were all outrunning the storm to stay at my already crowded four bedroom house. (My wife and I have four kids of our own). We headed to Walmart, where we bought milk and bread. We gassed up the trucks. We bought air mattresses.

We bought beer—lots of beer.

We steeled ourselves and got ready as the cavalcade of kinfolk headed our way. At the height of their stay, we had a headcount of 18 people, four dogs and a cat living in our house for the duration of the storm.

And it could not have been a better time for the Panowich household.

I watched my kids meet and hang out with their cousins for the first time. They laughed, watched movies and played video games from the huge palette of blankets and pillows that had previously been my living room floor. We cooked big meals and ate off paper plates. Everyone pitched in on the mess. Truthfully, we didn’t care about the mess. My sister-in-law celebrated her 35th birthday during that visit and my wife was able to spend it with her. It was the first birthday they’d spent together in more than 13 years. We ate cake and played cards late into the night—kids and all. I got to hear stories about my bride that only her mother could tell—the kind of stories she’d always threatened to “Tell her husband someday.” This was the family I’d been hoping for my whole life and here they were all under my roof. Even more family came to visit once word got out that rest of the crew was hunkering down in Augusta. It was an absolute blast and after a week of getting used to tip-toeing between sleeping kids and air-mattresses, one would think a man would be ready to get his house back.

I wasn’t. In fact, after the storm had dissipated, the cars were packed, and all the goodbyes were said and made plans to never let that big a lapse in time pass between visits again. We even locked in a big family cruise next March before the promises of a reunion faded into the ether. My oldest daughter still keeps in touch with her cousin through social media and I just know that bond will continue to grow their whole lives. I also know my 15-year-old nephew is walking around with his new Apple Air Pods thinking his uncle back home in Georgia is the coolest. Was it a pricey gift? Yes. Was it worth it to see a kid doing his best to be cool let his guard down and give that bear hug in return? You’re damn right it was.

It was a magical week at my house courtesy of a hurricane.

So, thank you, Florence. My whole family owes you one.

Article appears in the November/December 2018 issue of Augusta Magazine. 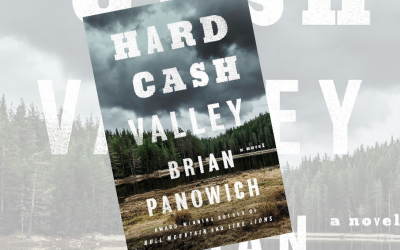 By Brian PanowichIllustration by Michael Rushbrook   So, I did a thing. As of Jan. 1, 2020, I signed off of social media. I closed up shop on Facebook, signed out of Twitter and Instagram, and even let go of my long-standing account on Pinterest. Now, I still...