Armendy Faith Davis is a resident of Hart County, Ga., who happened to have a job in Anderson, S.C. Armendy made that commute all the time. It was a boring and uneventful stretch of blacktop that she’d grown accustomed to, so the rain coming down in sheets on the morning of March 6 was not a good enough reason for her to stay home and miss work.

As Armendy crossed over Lake Hartwell, the rain caused her SUV to hydroplane. She lost control of the vehicle and slid across the two-lane highway. Her truck burst through the bridge’s guardrail and she toppled into deep water below.

As the truck hit the lake and began to fill with water, Armendy tried to open the door. She couldn’t. She tried to break the windows but the pressure from the water against the glass wouldn’t let her. The truck continued to sink as Armendy became frantic and climbed into the backseat to outrace the rising water. She continued to pound on the glass but still, she couldn’t get out.

Within minutes of driving down a familiar road she’d been on  100 times over, Armendy found herself pressed against the back glass of her SUV, breathing from a small pocket of air that only allowed enough space for her nose and mouth. Her last thoughts before the darkness took her were of her young son and how he would have to live his life without his mother. At that point, Armendy had accepted that she was going to die.

Some time later, she awoke from her nightmare in the back of a county ambulance. The EMS crew told her in route that someone driving by saw what happened and dove in the lake after her. The medics went on to tell her how someone managed to pry open the back hatch of her SUV, pull her out, and get her to safety. A stranger saved her life and ensured that her son didn’t lose his mother that day.

A thankful Armendy was determined to make sure this stranger didn’t remain nameless for long.

Enter Eric Pierce. Mr. Pierce works for the Lavonia Post Office. He’d been delivering the mail on the morning of Armendy’s accident and he knew that particular ribbon of highway as well as she did, so he noticed the missing guardrail on the bridge. He crossed over the lake and delivered mail to a few more homes but something kept gnawing at him. Something kept telling Eric to turn around and check out that bridge a little closer—so he did.

When he returned to the bridge and walked to the edge, he could see the nearly submerged vehicle. He called 911 when saw Armendy’s fingers moving behind the glass of the back windshield. He dropped his phone and dove into the water. As he swam out, a fishing boat came into view and he screamed for their assistance. Another vehicle stopped on the road behind Eric’s and together they were able to get through the hatch of the still-sinking SUV. They retrieved an unconscious Armendy Davis from inside. She had already begun to turn blue. Everyone helped get her to the edge of the lake where she began to breathe again. EMS arrived within minutes and once Armendy was receiving proper care, it seemed Eric and the others just went about their day, and Armendy eventually got home to her son.

That’s where I come in. This story sounds like a chapter from one of my novels. It happened not too far from my own backyard. But I didn’t read about it in any of the syndicated newspapers I follow. I didn’t watch this story unfold on any of the national news channels. The only reason I know anything about this story is because of my wife. She is a former classmate of Ms. Davis’ and she read it to me from a post Armendy herself wrote on Facebook.

Occasionally she’ll read me a post that she thinks I might find interesting. I did find this story interesting. In fact, I was moved to tears by it. But something I find even more interesting is why the world at large isn’t privy to Armendy and Eric’s story. Why doesn’t everyone get to hear these kinds of stories from our big media outlets? Why is it that all we ever get when we turn on a TV or open a newspaper is a flood of negativity and fear—fear that divides us—and is intent on keeping us that way?  Our entire county can only benefit from knowing about what Eric Pierce did. This story has it all—tragedy, suspense, danger, a damsel in distress, heart, courage, and a hero.

I think Eric’s name deserves to be printed on glossy paper. I believe big media and the associated press should pick up this story, so that everyone—everywhere—can be reminded of what real news looks like—what it feels like—especially now, when it can be pretty damn hard to tell. But more importantly, so that all of us can remember the power of what happens when people who are drastically different decide to care about one another anyway.

Each of us has the power to turn around as well. And who knows? If you do, you might just save someone’s life.

Article appears in the October 2018 issue of Augusta Magazine. 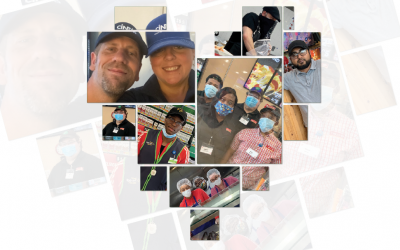