The Deep South’s Oldest Rivalry Auburn vs. Georgia, by Douglas Stutsman, celebrates the rivalry between Auburn University and the University of Georgia. The rivalry began in 1892 and has been largely a competition more brotherly than bitter. Stutsman recounts the unforgettable games, moments and personalities on the 125th anniversary of a contest woven through three centuries of competition. Stutsman writes:

“Through 120 contests, thousands of players have come and gone. Coaches have changed. Stadiums have expanded. Still, as the second week of November approaches each fall, one game is guaranteed. “The Deep South’s Oldest Rivalry is as great a rivalry as there is,” Tom Dooley said. It’s a proud rivalry. A family rivalry. Most of all, it’s a respectful rivalry.”

Arcadia Publishing and The History Press

“Consider yourself at home with Lionel Bart’s classic musical based on Charles Dickens’ novel, Oliver Twist. The Tony and Olivier Award-winning show is one of the few musicals to win an Academy Award for Best Picture and is widely hailed as a true theatrical masterpiece by actors and audience members alike. This classic Dickens story contains some of the most recognizable music in show business, with a compelling story that will leave audiences begging for “more please!”

Humans are visual creatures. We use our eyes to decide if something looks good or if it matches our style. Lens, Pinterest’s camera search tool, is available worldwide on iOS and Android for Pinners. When you open the latest version of Pinterest, you’ll see a camera icon next to the search bar. Lens is all about helping you find ideas inspired by things you see in the real world. Just point Lens at an object, then tap to discover related ideas. Try pointing it at an ingredient to discover recipes to try or use it on a pair of shoes to see similar styles, along with ideas for what to wear them with. You can even search for ideas using images from your camera roll.

“It came rolling out of Memphis like a hurricane and they called it rockabilly long before they called it rock and roll.” Don’t miss ’56, the
new hit touring show. ’56 stars Cody Ray Slaughter, who appeared on
Late Night with David Letterman and starred in the Tony Award winning Million Dollar Quartet. The show also features the Hillbilly Katz with drummer David Fontana, son of Elvis’ drummer DJ Fontana. Through music and stories, the show will take you back to Elvis’ breakout year of 1956, before he was the King of Rock and Roll. VIP ticket holders are welcome to join at a private meet and greet with the artists prior to the performance at 4:30 p.m.

Each year Southern Living releases several lists boasting “The South’s Best,” and in their 2017 accolades, St. Simons Island landed the #2 spot in The South’s Best Islands and Jekyll Island landed the #7 spot for its unspoiled beaches. With the kids back in school, the Golden Isles is the perfect weekend spot to set your watch to island time and explore what’s happening.

The King and Prince Beach & Golf Resort, located on St. Simons Island is a historic ocean front retreat where relaxation, inspiration and recreation have resided in equal measure for 80 years. Appreciated for a wide selection of richly decorated rooms, ocean front views, seaside cabanas, luxurious beach villas and spacious guest houses, this historic resort pairs Southern hospitality with luxury. ECHO, the island’s only oceanfront restaurant entertains broad, sweeping views with both indoor and outdoor dining. Try the crunchy seafood mac-and-cheese while sitting in the sun-lit atrium by day or sit by the fireplace at the ECHO bar sipping cocktails until late night.

The Cloister at Sea Island specializes in swanky rooms, suites and villas in a waterfront style resort. This Forbes Five-Star accommodation will captivate you with elegance, birds chirping in the solarium and tea and cookies in the afternoon. The Georgian Room at The Cloister is the only Forbes Five-Star restaurant in Georgia and brings the finest ingredients to your table with a world-class wine list and featured dishes like Diver Scallop and Caviar.

Jekyll Island Club Hotel won Best Hotel in Georgia with Southern Living and is a sprawling high-end resort with refined quarters, three restaurants and an outdoor pool. The Clubhouse offers elegant leisure from the iconic turret, verandas and bay windows, to the exquisite interior details and The Grand Dining Room.

St. Simons is always humming with a variety of fun activities and things to do. From local farmer’s markets, art and antique shows, Music in the Park, outdoor excursions, to wine tastings, gallery exhibits and tours, you’ll never run out of things to do in the Golden Isles. Visitors can enjoy kayaking, fishing, biking the St. Simons Island Trail System, horseback riding, golfing or relaxing with your toes in the sand on East Beach. St. Simons Island offers exciting water-sport activities and eco-adventures, exceptional restaurants, boutique shopping, art galleries and a genuine friendliness that makes a vacation memorable.

If you’re a history buff you may like the Coastal Georgia Historical Society Museums, Galleries, Exhibits, Lighthouse tower and Maritime Center Watch tower. St Simons Lighthouse Museum – a working lighthouse built in 1872 and Fort Frederica National Monument are excellent choices and you won’t want to miss the picturesque and haunting grounds of Christ Church, Frederica – one of the oldest churches in Georgia, with worship held continuously since 1736.

Once you’ve worked up an appetite, Catch 228’s fresh oyster bar or pretty much anything from the inspiring and ever-changing menu at Delaney’s Bistro. Try some craft beverages and small plates from Ember or the freshest fish from Halyards. St. Simons’ Southern Soul Barbecue is worth the stop as it took the #1 spot this year for The South’s Best Barbecue Joints in
Southern Living.

Island Hopper Tip: September 2-3, Labor Day weekend, The St. Simons Island Antique Show: Dealers from all over will feature a vast array of fine and fun merchandise. Located under the oaks, on the grounds of the beautiful revitalized
Postell Park.

St. Simons is 159 miles, a three hour drive,  from Augusta

Aiken is known for its colorful horse statues, Greenville is dotted with bronze mice, and now downtown Augusta is quickly becoming the place to find tiny doors. The doors are the brainchild of April Henry, a self-employed artist, who lives downtown.

“I was born and raised in Augusta,” Henry said. “Many of my friends moved away after college but I love my hometown, especially the downtown, and it’s my passion to bond with it.”

Henry was looking for ideas to promote walkability downtown and encourage more people to visit the area, which she feels has been unfairly stigmatized.

“I grew up in Columbia County, and some people I know are nervous about coming downtown,” Henry said.

She heard about a series of tiny doors going up in the Atlanta Beltline and decided to replicate the idea in downtown Augusta. “It was the perfect art for me because I love miniatures,” Henry said. Growing up she had a floor-to-ceiling dollhouse filled with tiny furniture, and now she collects all things undersized, everything from a tiny cheese plate to a minuscule gumball machine.

She debuted her first door in February and now there are three. Henry’s working on a fourth, and her goal is to have ten doors. She calls her street art ADOOre, to reflect how much Henry adores Augusta. The tiny doors have a mascot or rather “mouse-cot” aptly named Augustus II.  Each time she debuts a new door, she hosts a scaled-down  ribbon-cutting with tiny scissors.

Curious where you can find these cute doors? Henry is coy about the locations because the whole point of the doors is to scour downtown and discover them. However, if you really want to know where they are, the Augusta Visitor’s Center is planning to publish maps revealing the location of each door.

Henry also intends for the doors to be interactive. Two of the doors open, and she likes to hide surprises behind them like laminated photos and stickers. The doors are catching on and businesses are beginning to request them. Henry couldn’t be happier about that. She hopes that people who wouldn’t normally come downtown will be drawn in by the doors, but will also stick around for all that the area has to offer.

“I’m proud of where I live and wanted to give something back.  In downtown, there’s great coffee, musicians, vintage clothing and books,” Henry said. “People are always saying it has so much potential, but they don’t always take time to appreciate everything that’s already there.”

When you think of the Augusta music scene, you probably don’t automatically think of progressive rock. Believe it or not, there’s a growing contingency of prog rock bands and fans in the Garden City, and the current leader of the pack is the band Sunwell.

The band is made up of the classic power trio of guitar, bass, and drums, but their approach is anything but classic in nature. While listing King Crimson and Rush as key influences, the band takes on a decidedly more modern metal approach to the music. The sound is aggressive and in your face, but it also belies an underlying sense of humor, giving the band a quirky unpredictability, especially in a live setting. While the focus at the moment is on instrumental music, the group is working on bringing vocals into the mix, in order to broaden the overall sound.

Even though Sunwell has been around for the better part of a decade, they haven’t spent much time outside of Augusta. During that time, they have instead played around town often and have developed a strong local following. According to bassist Chad Aiken, they are hopefully ready to made the leap into touring on a more regular basis.

Right now they’re in the process of finishing up a recording session of three new tracks, and they plan on putting out the songs sometime this year. You can catch them locally in venues like Sky City, the Soul Bar, Iron Heights, and others.

Believe it or not, there’s a growing contingency of prog rock bands and fans in the Garden City, and the current leader of the pack is the band Sunwell. 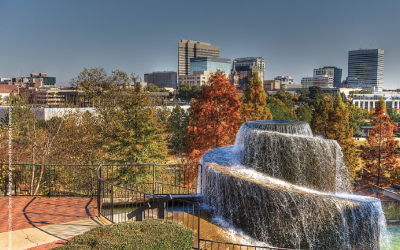 TECH Mercari, the Selling App Looking for a fast and easy way to sell or buy (almost) anything? Then look no further than Mercari, the selling app. Mercari can help you sell all that stuff you don’t use, never used or simply outgrew. Shoes to electronics. Fashion to...