John Beck’s path to the restaurant industry is a familiar one: he needed a job while he was in college, but then decided to stay. Fast-forward 35 years and he is on his sixth owned and operated restaurant. You’re probably familiar with Sheehan’s, the beloved Irish bar and neighborhood eatery, which Beck named after his wife Tricia’s maiden name (before they were even married, something they still laugh about today). Beck and Sheehan make a great team—he oversees the kitchens and operations and she manages everything from marketing to flowers—and they’ve applied that dynamic energy to their latest opening, Becks.

“We love oysters! And there was a need for another upscale oyster bar with Abel Brown being the only other one in town,” Beck says of the concept. Check out the chalkboard for the day’s selection, which features regional varieties during colder months, like Apalachicola from the Gulf, often ranked as some of the best in the world, or Single Lady oysters from South Carolina, which start briny but finish clean. East Coast varieties are offered year-round, including some of Beck’s personal favorites like Mookie Blues from Maine, known for their sweet finish, and plump, buttery Standish Shores. Besides serving them raw on the half-shell, Becks also offers baked and chargrilled oysters.

In addition to oysters, Beck shares that he wanted to create a menu with heavy regional influences—Southern, Creole and lots of fresh seafood—as well as crowd-pleasing options whose inspirations range from Southwestern to Asian. Early favorites include an 18-oz. woodfire-grilled Cowboy ribeye and a recent special of crispy Scottish salmon finished with a wasabi-mustard-champagne sauce. At the bar, you’ll find simple yet well-balanced drinks, like a margarita crafted with house made jalapeño ginger limeade, and an almost-too-pretty-to-drink Champagne cobbler made with muddled oranges, raspberries and cherries. Beck also saw a need for another lunch destination in town, so on Becks’ daytime menu you’ll find from-scratch soups, salads and sandwiches, as well as dishes like shrimp and grits and smoked-then-deep-fried BBQ chicken wings.

Running two restaurants plus a catering business is no small feat, and Beck is quick to praise the dedication of his staff. They’ve also made Becks a family affair—their son, Jack, who has been learning the restaurant ropes since he graduated from Georgia Southern University in 2015, now runs lunch service, and Aurelia, their 11-year-old daughter, plants and maintains all the microgreens. Looks like the road to restaurant success just might be all in the family.

“We created this cocktail for the Southern ‘dog days of summer,’ when refreshing, blended cocktails hit the perfect spot,” says Matti Anttila, founder of Dixie Southern Vodka. Kick off the season by serving this riff on the mint julep for the Kentucky Derby, then enjoy the slushy sipper all summer long.

Blend all ingredients in a blender

Pour into a rocks glass

If you were to associate any liquor with hunting, you’d probably think of whiskey. But you’d only be partly right. The story of Dixie Southern Vodka starts with a hunting trip that’s now the stuff of legend for its founder, Matti Anttila. After successfully shooting a 350-pound boar, he and his friends celebrated with several rounds of bourbon, but one guy was sipping vodka—Tito’s to be exact—on doctor’s orders that he should drink less whiskey and more vodka (but that’s another story). Anttila, a former investment banker turned spirits entrepreneur, was intrigued by the notion that the closest regional vodka came from Texas, and saw an opportunity to develop a truly Southern craft vodka.

“Most Southern spirits companies focus on whiskey and moonshine,” Anttila notes. “Nationally, there are 73 million cases of vodka sold per year, but there were limited offerings from the Southeast and we felt we could develop something that really embraces all the New South has to offer in terms of food, drinks, culture and craft.” So, after that fateful hunting trip in 2012, he set up shop in Charleston and launched Dixie Southern Vodka.

The original Dixie Southern Vodka is distilled from corn, which lends the spirit a lighter, sweeter flavor profile than rye- or potato-based vodkas. Anttila and his team work with a partner in Missouri for the first six distillations, then bring the base distillate to Charleston where it undergoes a process called TerrePURE®, which helps smooth out the taste. It’s then blended with locally-filtered water to create what Anttila describes as a “really smooth, highly versatile vodka.”

This vodka also serves as the foundation for Dixie’s line of flavored vodkas which includes black pepper, citrus and mint. Anttila is proudest of Dixie Black Pepper Vodka; batches of vodka that have steeped separately in Szechuan peppercorns and Serrano peppers are combined to create a spirit with nuanced black pepper notes, but without the heat. It’s practically tailor-made for Bloody Marys, and restaurants across Charleston have incorporated it into the classic brunch cocktail—check out 82 Queen, The Macintosh and Poogan’s Porch for some of Anttila’s favorite versions. Dixie Citrus Vodka is infused with an extract derived from the juice and pulp of Florida lemons, limes and tangerines, as well as some of the peel, which lends the lime-forward spirit subtle bitter notes. It can play in fancy cocktails like the Bubble Bliss at Charleston’s Fish restaurant, where it mingles with hibiscus syrup, orange juice and Prosecco, but it’s just as good simply mixed with club soda. And Dixie Mint Vodka, which is blended with an extract made from Southern mint leaves, is excellent in sweet tea or lemonade cocktails, or in an inspired take on a mint julep (see Lagniappe for a recipe).

The bottling and finishing of the product takes places in Charleston, and the materials echo Anttila’s goal to source everything from within the Southeastern region: the glass for the bottles comes from Missouri, the tops hail from Alabama, labels are from North Carolina and boxes from South Carolina. But the praise is universal: Dixie Vodka received a Platinum Medal at the Sip Awards and was also awarded several honors by the Beverage Testing Institute, including a Gold Medal, 93 points (out of 100) and a “Best Buy” designation.

In Augusta, you can sip Dixie Southern Vodka at Finch & Fifth and Abel Brown or pick up a bottle at Windsor Package Store.

For Verdant Kitchen co-founders Ross Harding and Howard Morrison, the idea to grow ginger and turmeric—two sub-tropical spices that are not typically commercially grown in the U.S.—stemmed from a conversation about wellness and superfoods. Ginger is lauded for its anti-oxidant properties and ability to alleviate nausea, and turmeric is a potent anti-inflammatory agent. Harding, who grew up in Brisbane on Australia’s east coast (where ginger is commercially grown), was struck by how similar its climate—a long, warm, wet growing season followed by a cool winter—is to Savannah’s, where Morrison’s family farm, Lebanon Plantation, is located.

Drawing on support from the University of Georgia, Georgia Organics and Georgia Grown, they planted organic seeds, certified the farm USDA Organic and waited. Lo and behold the ginger grew; in 2014 they began developing products for their gourmet-foods-meets-wellness business and started selling ginger powders and syrups at farmers’ markets. In 2015, they expanded to regional supermarkets, and by the end of the year, Oprah Winfrey named Verdant Kitchen’s ginger syrup and ginger-infused honey to her ‘Oprah’s Favorite Things’ list.

Oprah’s picks are still two of the top-selling products. The syrup is excellent in classic ginger-based cocktails like a Moscow Mule, and the wildflower honey is, as Oprah described it, luscious. Other notable products include their award-winning Savannah Snaps, ginger candies and ginger ales, including the turmeric-infused Ogeechee Gold. If you’re not familiar with turmeric, Harding describes it as having a savory, root vegetable flavor. It lends a golden-orange hue and earthy flavor to the turmeric-infused wildflower honey and turmeric-dusted baby ginger, as well as a boost of anti-oxidants to the ginger turmeric green tea, which Harding sips daily.

This article appears in the May 2017 issue of Augusta Magazine. 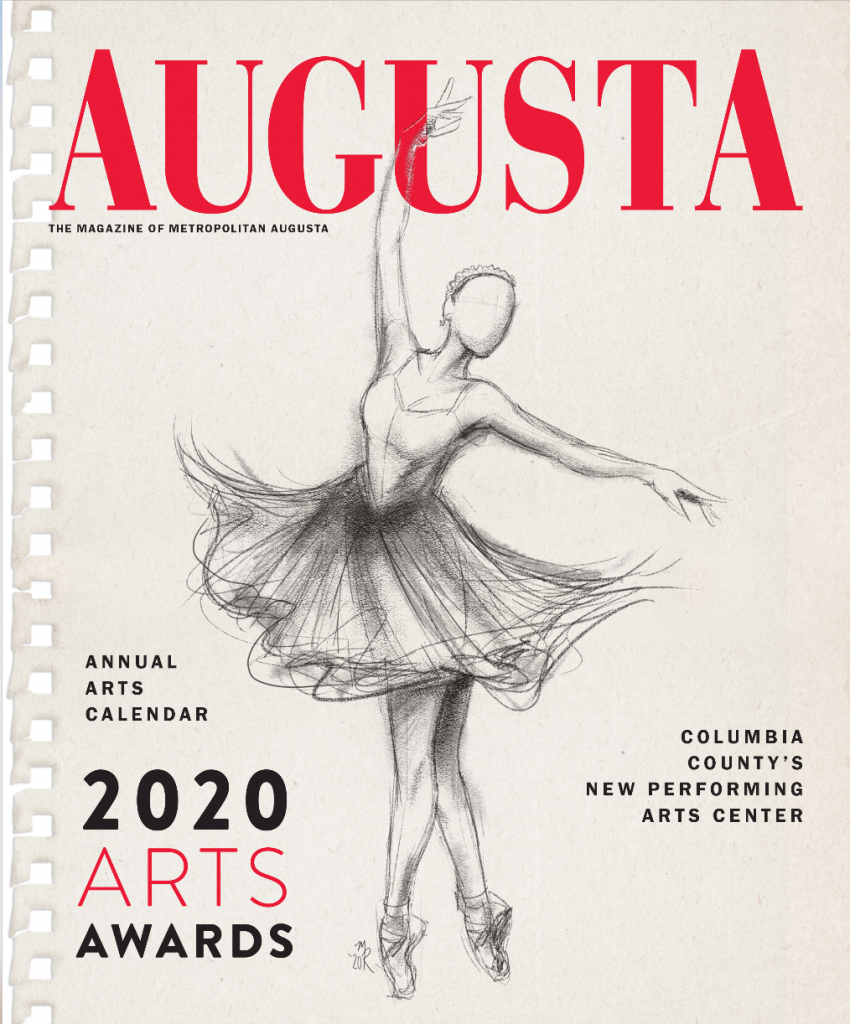 By Vera Stewart  |  Photo by Amy J. Owen Vera's Tailgating Menu Whether it’s a weekend of camping when the weather is nice, tailgating experiences at a college football game or just entertaining outdoors, planning is essential. DON’T let the food stress you out!  As a...

EAT - El Borikuazo By Griffin Nelson  |  Photo by John Antaki More than anything else this year, I’ve missed traveling. Puerto Rico has been on my list for a while, but I’ve yet to get there in person. In the meantime, a short drive to Aiken to eat at El Borikuazo...

By Vera Stewart  |  Photo by Amy J. Owen Sing the South with Summer Appetizers The aromas, textures, colors and tastes of summer are the BEST!  In thinking about cooling off, maybe by the pool or under a shaded structure, having something delicious and attractive to...