In 1979, a young candidate for a job in the English department at Augusta College – we’ll call him Jim Garvey – got his first tour of downtown Augusta. On Greene Street he saw a huge Catholic church, empty and abandoned, with a for sale sign out front. All along Broad Street, a handsome cityscape of 19th-century buildings, stood empty storefronts. No people walked the sidewalks, no cars were parked in the lined spaces. Whoa, he thought, this place is dead.

n 2015, a candidate for a job in the department of art at Augusta University—Scott Thorp—got his first tour of downtown Augusta. He also noticed a lot of abandoned buildings and empty storefronts. Wow, he thought: Empty storefronts usually mean cheap rent; artists always look for cheap rent. What a great opportunity there is in Augusta to grow the arts and culture downtown!

Which of these two reactions reveals more creative potential?

Thorp is now chairman of Augusta University’s Department of Art. His specialty—creativity. That’s a skill, a process, an attitude he taught as design coordinator in the department of foundation studies at the Savannah College of Art and Design (SCAD). The things that attracted him to Augusta are the very things that would have frightened less creative candidates away. Forget the empty storefronts. A more fundamental problem for Thorp was trying to figure out the name of the institution he was applying to: Augusta State University? Georgia Regents? Was that one institution or two?

“It was perfect,” Thorp decided. “There’s so much flux at this institution, it’s a place where anything might happen. I want to be a part of that.”

All around Augusta, Thorp sensed potential. People in the community were talking about growth and change, welcoming Unisys to Port Royal and the Cyber Command to Fort Gordon. The city’s Westobou Festival was evolving, the university was reclaiming its roots in becoming Augusta University, its downtown health sciences campus was expanding. All of this promised a revitalized, energized, re-purposed downtown. What an opportunity for artists.

“Augusta is ripe for this kind of resurgence. The art department can use art and culture as an economic driver to revitalize downtown Augusta. We are building a creative community to tap the area’s potential. It just takes an infusion of creative people to make sense of all the pieces and show the growth opportunity here.”

Thorp was hired as chair of the department of art to build that creative community. After a successful career in the D.C.-Baltimore area as a painter, Thorp moved to Savannah to teach at SCAD. There he studied the processes that make up what we call creativity and he created a new course to help his design students master those processes.

Creativity is not a magical gift dropped from the heavens on a select few, but a skill available to almost anyone willing to cultivate, exercise and discipline it. He taught his students to brainstorm problems that need solving; then to determine which problem is the best one to solve and to collaborate with others to generate ideas for the problem’s solution; to create prototypes, develop the best one to bring to fruition and deliver it to a client; finally they had to develop a persuasive “pitch,” to convince potential clients that this product was the answer to their problem. Successful creativity involves all those things.

“So yes, you can teach creativity. I’ve been doing it for years.” Using this approach, Thorp’s students won many national design competitions.

Starting this fall, Thorp will offer Design Thinking, his creativity class, at Augusta University. The course will be open not just to art students, but to students of all majors. “It’s not an art class, it’s an idea class,” Thorp says. Students will apply the processes and skills taught in the class to their own lives and professional interests.

There’s already enormous brainpower and creativity within the faculty at Augusta University. But only a few years into the merger of the liberal arts and health sciences institutions, the intellectual energies of the Summerville and health sciences faculties pull in different directions. “This university is full of interesting people doing interesting research. We need to talk to each other, collaborate, feed off each other,” Thorp says.

To that end, the art department sponsored an art-science dialogue in February. J. D. Talasek, director of cultural programs at the National Academy of Sciences in Washington, D.C., moderated the panel of Augusta University artists and scientists in a discussion of 3D technology in visual arts and medicine. The meeting was organized by Cheryl Goldsleger, the Morris Eminent Scholar of Art, under the auspices of LASER (Leonardo Art Science Evening Rendezvous), an organization that promotes interdisciplinary activity around the world.

YOU CAN DESIGN A FUTURE FOR YOURSELF THAT IS CREATIVE.

We need to create a thinking incubator on this campus, a vibe of brainpower like you feel when you visit top-notch universities. We’ve got the people to do it. We just have to harness that energy.”

All that brainpower and creativity can then spill off campus and into Augusta. Look at how SCAD transformed Savannah. Thorp saw it up close.

“When I moved to Savannah, I noticed that the people walking the streets were smiling. When you have happy people walking around, other people are more likely to go downtown themselves. Many of those people were students. Young people are vibrant. They bring energy to an area.” And with Augusta University building dormitories for 500 students, there will be lots more of that kind of energy on Broad Street.

“Young people are looking for things to do. They want new things, exciting venues, interesting places to eat. If they find those things here, they’ll stay after they graduate. If you can retain them for a year or two, you’ve pretty much got them. Young people are interested in a thriving community. And their presence starts to change the economy downtown. They’ll be living above the storefronts, raising the tax base, improving the schools.” Those new graduates of Augusta University are also the kind of savvy young professionals who create the start-ups that fuel so much of today’s economy. In this digital era, there’s no need for them to move away to be successful.

The arts can be an economic driver in all this. For one thing, “Artists are kind of like first responders,” Thorp says. They set up their studios in areas where the rents are low, areas that have fallen on hard times; their presence makes the community more desirable. It’s a process that has been repeated in cities all over the country: Artists move in and neighborhood revival begins.

Successful neighborhoods don’t just happen. They need to be designed. As Augusta University expands, Thorp wants it to spill over into the downtown area. Expansion needn’t mean putting up more buildings on the campus. Many existing buildings downtown could be re-purposed for the university’s needs. And it’s better if those buildings are not all clustered together. “If the students have to walk around in the area to get from place to place, businesses attractive to students will build up.” And the money students spend won’t all stay in the university—it will be spread around the community. Designing the university’s growth creatively will benefit both the institution and the town.

“The world we’re in,” Thorp says, “is about design. When you get in your car, you’re in an environment that someone has designed for you. It’s the product of someone else’s creativity. When you go to Target, that environment is designed for you. When you go into a museum or gallery, that’s a designed experience. Design is just purposeful creation. In terms of disciplines, of course, there’s graphic design interactive design, game design, fashion design, interior design. But ultimately, we want to teach our students that you design your future and that, if you’re intentional about it, you can design a future for yourself that is creative. So my interest at this university is creating an equal setting for design and fine art so they can work together to help students work more collaboratively and creatively.”

The work produced by the art department’s students and faculty will eventually be seen all over town. Installation art, graphic design for non-profits, murals: “You’ll see our presence begin to emerge all over the community. Augusta has a lot of personality. We can help it tell its story a lot better. Our department makes stuff that is very visible. We put it on line and everyone sees what we do. We can be a beacon for contemporary art and activity to increase the cultural significance of Augusta.

“I’m moving my family here and that’s the kind of place I want to be.”

This article appears in the April 2016 issue of Augusta Magazine. 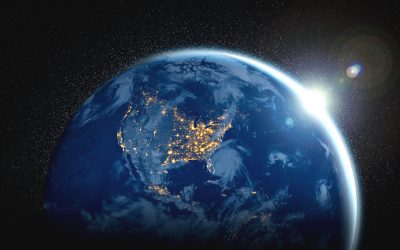 Celebrate Earth Week 2021 From Home Through These Virtual Events

The Earth as seen from space. (©Blue Planet Studio/Shutterstock) By Jennifer McKee Earth Week comes but once a year, but its message should be held throughout the seasons. Learn more about our planet and how to be a careful custodian at these virtual events that...

Offset your carbon footprint by donating to projects that help the Earth. (©Maridav/Shutterstock) By Jennifer McKee With Earth Day on the horizon, now's a great time to begin a healthy new travel habit: reducing your carbon travel footprint. The eco-conscious can find...

National Pet Day is April 11. Here’s How to Celebrate