If you’ve driven on River Watch Parkway lately or turned up Cabela Drive on a shopping or sporting whim, you might have noticed several brown and yellow signs staked into the ground announcing that land is available for sale. The colors on those signs certainly distinguish them from the various iterations of the standard red, white and blue seen on almost all other real estate signs, residential and commercial, in the area.

And that is exactly the impression that the folks at Jordan Trotter Commercial Real Estate want the signs to suggest about their company — that the experience their customers have is out of the ordinary, distinguished, even exceptional — the sort of experience that gives a pleasant shock, much like discovering … gold in the mud? OK, maybe that no-so-cryptic reference to the brand’s colors is a bit far-fetched, but the more important matter is whether it is true.

Who are the newest kids in town whose steady rise in the local commercial real estate scene is as indisputable as its signs are unique?

A common mistake people make is to think that “Jordan Trotter” refers to one individual — an easy mistake to make, since no hyphen links the two names on the sign. The truth is that “Jordan” is Troy Jordan, and “Trotter” is Dennis Trotter, principal partners of the firm, neither of whom is new to commercial real estate.

An even more common mistake is to mispronounce the first half of the firm’s name. This adds to the distinguishing features of the firm, though, just because it’s unexpected. Don’t pronounce “Jordan” as you would the surname of the NBA’s greatest of all time — No. 23 of Chicago Bulls fame. It is not “JOR-dan.” Instead, it’s pronounced “JUR-dan.” This should be easy for Southerners — or for anyone who has a penchant for eliding words, softening vowels and muting final consonants. (“Lemme introduce ya, ma’am, to the folks down at Jurdan Trotta.”) So, if you get the chance to meet Troy Jordan, you’ll at least know how to say his name right, which might elicit that broad smile of his.

Indirectly, smiles are a part of the firm’s story, for what brought Jordan to Augusta was a desire to broaden his opportunities by applying to dental school.

“To get out of a small town (Fitzgerald, Ga.), you got to be a doctor, dentist or lawyer, right? So, my wife and I moved here [for] dental school,” he said. “We waited a year to apply and got sidetracked, working in sales for Alltel. I enjoyed the sales process and being out of the office. I went to work for Michael Graybill, and he sold me on day one that I needed to get into commercial real estate. It was a tough call to our parents to let them know that we were no longer interested in dental school — that both of us were changing our career paths.

“I ended up at Blanchard & Calhoun, but I realized that showing houses was not for me.”

Trotter’s path to commercial real estate was decidedly less circuitous; you might even say working in real estate is in his blood. Back in the 1970s and ’80s, his grandfather owned Georgia’s largest residential real estate brokerage outside Atlanta, Trotter Realty. With pleasure, Trotter recalled one ingenious way his grandfather showed houses to potential buyers in the days before the internet, when access to the multiple listing service, or MLS, was not as swift or thorough as it is now.

“He had a double-decker bus shipped over from London — all red, the real thing — and on Sunday afternoons, that’s what people would do: They’d hop on the double-decker bus and [be driven] around Augusta to look at houses. Pretty cool.”

Eventually, Trotter’s grandfather donated his bus to the Augusta Museum of History and sold his company to Meybohm, where, as a teen, Trotter first acquired real estate experience. For him, the commercial sector was much more interesting: “Meybohm was a wonderful operation — I had a wonderful career there — but it was time for a change of scenery.”

Enter Trotter’s brother, Jim, a pivotal character in this story. An attorney, Jim Trotter had worked with Jordan frequently while Jordan was at Blanchard & Calhoun. In short, Jim Trotter became the bridge by which Jordan and Dennis Trotter — two men longing for a change — met.

That meeting was toward the end of 2012, and the two launched their firm in 2013. Doing so was not without some measure of anxiety, as Dennis Trotter explained.

“Our market is filled with these legacy companies that have been around for decades, generations. They’re great companies, well run, and here we come out of the ground, the new kid on the block, going up against companies that were 50 or 100 years old. So, to compete with those companies, [everything we do] has got to be spot on.”

Jordan and Trotter understood that competing with giants requires not only a novel approach — like Trotter’s grandfather’s double-decker bus — but also will and skill, without which novelty becomes merely a disappointing decoration.

Disappointment, however, doesn’t appear to be in Jordan Trotter Commercial Real Estate’s lexicon. In seven years, it has developed into a full-service group of brokers, asset and property managers, accountants and developers — a team that distinguishes itself by valuing both the novel and the traditional. The one helps to find clients, the other helps to keep them.

“It isn’t enough to be on the leading edge of marketing techniques and digital promotion, as important as that is,” Jordan said. “Our clients have come to expect our attention to every detail, from the initial contact to the successful completion of the project. What brings us to the forefront, I think, is our ability to meet the varied needs of our clients in a timely manner.”

Attention to detail and timeliness are certainly time-honored aspects of any business, but many people might also expect that the more monolithic a company can become — the more products and services it can offer — the better it will be. Trotter suggested otherwise, happily admitting his limitations and, by extension, the company’s.

“We don’t have the benefit of residential brokerage, residential development, mortgage, insurance and other divisions like some of the well-established firms in town,” he said.

Not every limitation, however, implies a lack, as Trotter clarified with playful overstatement.

“Honestly, Troy and I have enough residential knowledge to be dangerous. We’re not good at it; we don’t know it; we don’t like it. It’s not our focus at all. We’re not in that business, so we stay ahead by working hard within the commercial real estate arena and its natural cycles.”

Proofs of that hard work abound. Peruse the firm’s website, and you will see a broad array of projects in nearly every sector of the market, from health care to dining to banking, entertainment and even national security.

Perhaps one of the more noteworthy — and definitely ironic — proofs of the firm’s success has to be its work for the Guardhouse Square townhomes on Walton Way because, despite Trotter’s soft-pedaling the company’s residential acumen, it was for this residential development that the company won the 2018 Historic Augusta New Construction Award. The project provided a great opportunity to redevelop a closed daycare facility whose architecture wasn’t in keeping with that of its Summerville neighbors, an endeavor that helped to preserve the historic value of homes in that area. The homes there are some of the oldest in the city.

As Jordan Trotter Commercial Real Estate has grown, so has Augusta improved. I’m sure it’s no small feat to manage over 1.4 million square feet of space throughout the CSRA but, considering the economic damage caused by the coronavirus pandemic, Trotter finds something else to boast about.

“Many of our transactions have had measurable impacts on the local economy in terms of temporary and permanent job creation, housing and new shopping opportunities. That’s what we’re most proud of,” he said, quickly directing that praise toward others. “We owe a lot to the local, state and federal leaders who have played a role in helping create favorable [market] conditions.” Both he and Jordan believe that if such conditions remain, “markets like Augusta will continue to shine economically for a long time.”

Remember that the next time you drive past one of those brown and yellow signs. Sounds like the new kids in town have a good head on their shoulders.

Appears in the January 2021 issue of Augusta Magazine. 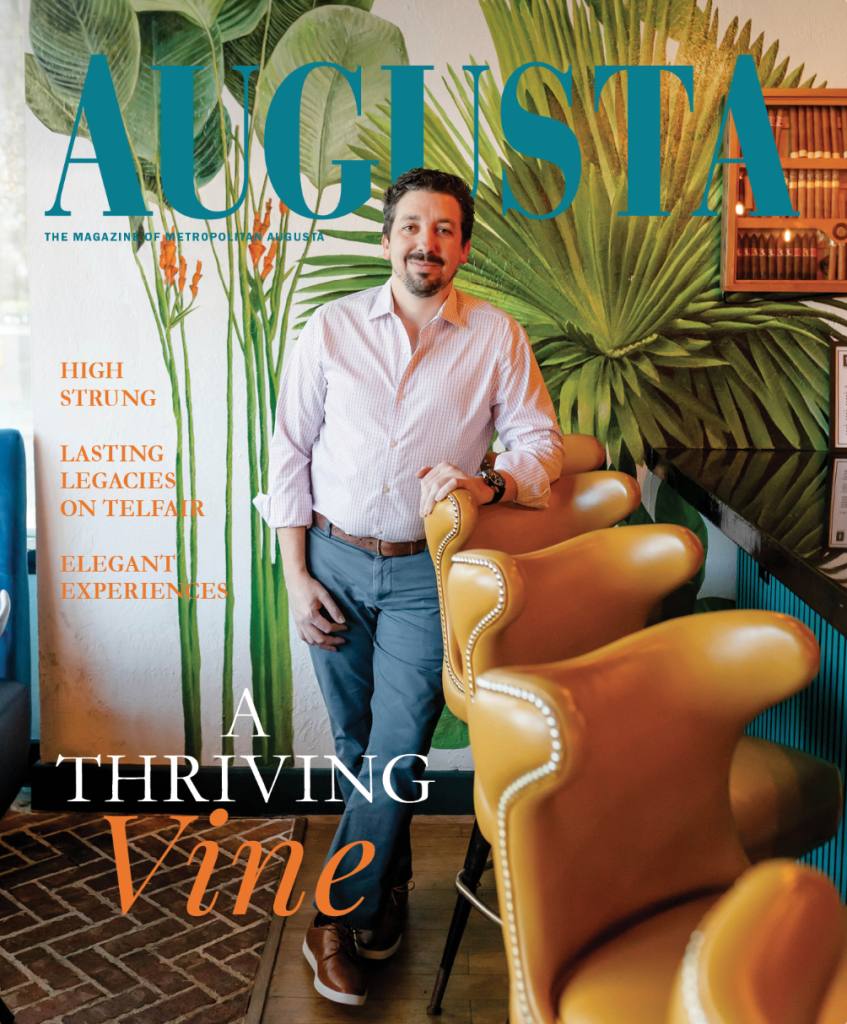 Elegant Bridals, a bridal and special occasions destination, is a passion project for Jane and her husband, Fathy, who opened the shop in 2001.

A Wedding at First Presbyterian Church

The wedding of Rebecca McGahee and William Stone at First Presbyterian Church.

The wedding of Rachel and Mark with a unique reception at a Daniel Field Airport hanger.